Known as the “artist horsewoman” and described by many as one of Australia’s most outstanding realist painters, Cathleen Elizabeth Edkins was born in 1922 on Coola Station, 27 kilometres west of Mount Gambier. Her life began on the land- a vast 26, 644 acre property managed for 35 years by her father, popularly known as ‘Coola Bill’. Her childhood world revolved around animals, particularly horses, as all travels at this time depended on them and heavy loads were transported by teams of bullocks or draught horses. On Coola it was expected that she would be required to learn the skills of the stockman, helping out with mustering and fire fighting when the need arose. Along with her parents and brother she was a skilled equestrienne, competing in Olympic standard dressage and show jumping. Her family frequently attended race meetings where her father’s thoroughbreds regularly won. Coola station honoured their beloved horses in death by burial in a unique cemetery called “The Graves of the Heroes” where each grave was adorned with a headstone. “I would never, never get sick of horses, they are my life completely…any animals, I love them all.”

From early childhood her artistic talents were encouraged by both parents and not surprisingly horses were her preferred subject. “If she was not sketching and painting then she was riding them,” said her father when interviewed by The Border Watch in 1947.

Under her mother Norah’s guidance she was taught the discipline of mastering her drawing technique before attempting painting. Norah herself had studied art under locally renowned artist Margaret French. Her father’s input was also much valued and his opinions often sought by the diligent young artist. “Oh father do please come and see if I’ve got this right, and straight away he could see mistakes in my work and it was quite wonderful.”

She respected her parent’s opinions enormously and it was with their blessing and encouragement that she begun her studies with internationally recognised artist Harold Septimus Power.  Miss Edkins rarely made detailed preparatory sketches but preferred to make a rough charcoal outline on the canvas prior to beginning her paintings.  While she painted in ‘plein air’ tradition she sometimes used many different locations for her paintings. Once she had settled on a particular composition she would travel the region and paint from life the scenic components she required.  A background of trees found at Telford’s scrub, water at Wannon Falls, one of her own horses and another found elsewhere, a wagon in her back paddock with a friend as the driver. One painting might find her setting up her easel at as many as six different locations. This method was in the tradition of studio theatrical painting where props and dummies sat in costume on sets but very unusual in landscape. The only time she referred to photographs was when horses were in movement, “My eye is not quick enough to see how the muscles move, particularly when they are pulling hard or galloping, that is where a camera does help.”

Cathleen Edkins combined her love of rural life and art to build her body of work.  Her life was fruitful and rewarding.

Upon her death in 2008 at the age of 86, her family gifted an extensive collection of her works to the Riddoch Art Gallery in order to ensure her artistic legacy. Some 50 paintings and numerous drawings and photographs make up this collection, including a pencil sketch depicting two men breaking in a horse to saddle, which Ms Edkins drew when she was just nine years old.

Ms Edkins won numerous art prizes throughout her life, including the International Lipizzaner Art Prize in Quebec and the O’Donnell Art Award, and her paintings are in collections in Australia, England, Ireland, New Zealand, USA, Japan and Europe.

*PLEASE NOTE: The Riddoch’s collection of Cathleen Edkins works is not on permanent display. Pieces may be curated into exhibitions from time to time – please check the list of current and upcoming exhibitions for further details.

Image: Sarah Chinnery, Portrait of the artist Cathleen Edkins sitting by an easel, 1955. Courtesy of the National Library of Australia Collection 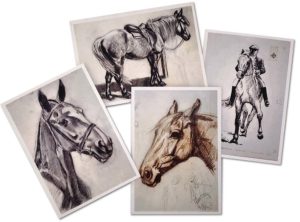 Above: Cathleen Edkins horse gift cards are available for purchase in the Riddoch Gift Shop.