Event Time: various times from 9:30AM

Come along and watch some of the world’s most celebrated established and emerging writers streamed live from the East Stage of this year’s festival.

This event is run in conjunction with Mount Gambier Library. 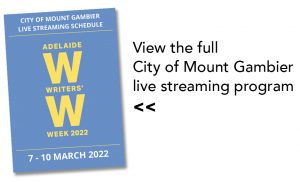 Submit your questions to the presenters via email at awwquestions@adelaidefestival.com.au or Twitter using #awwlivestream

9:30AM
FULFILLMENT: WINNING AND LOSING IN ONE-CLICK AMERICA
Alec MacGillis

There is a price to be paid for convenience. The one-click wonder of Amazon comes at a cost. In Fulfillment: Winning and Losing in One-Click America, Alec MacGillis sets out to explore what that cost is for the “America that fell in the company’s lengthening shadow”, namely the places where Amazon’s influence proved pernicious. Alec tells a chilling but utterly gripping dystopian tale of the pervasive destructive impact of Amazon on American life and many of its cities.

Supported by the Consulate of the United States. 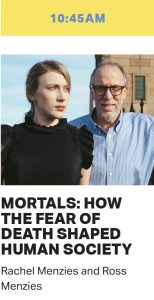 10:45AM
MORTALS: HOW THE FEAR OF DEATH SHAPED HUMAN SOCIETY
Rachel Menzies and Ross Menzies

This affirming book is less about death than how to counteract the fear of it and live a better life. Psychologists Rachel and Ross Menzies examine the many ways humans grapple with the dread of our demise, from the good, such as enduring art, to the bad, such as rampant consumerism and overpopulation. Insightful, illuminating and generous, Mortals: How the Fear of Death Shaped Society gives us the tools to overcome the fear of our own immortality – death anxiety – to enjoy our life while we have it. 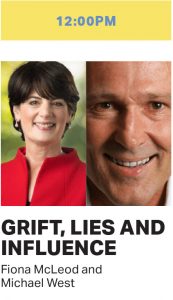 As we lurch from one scandal of misspent public money to the next, transparency and accountability in public life have never seemed rarer. Fiona McLeod is Chair of the Accountability Round Table. Her book, Easy Lies and Influence, documents how community interests have been undermined. Through his fiercely independent news site, Michael West is known for following the money, highlighting those corporations exercising insidious power over our democracy. They ask: where have we gone wrong and what should we do now? 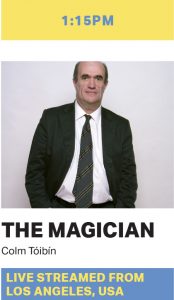 From The Heather Blazing to The Master, Colm Tóibín is acclaimed for his skill at entering the mind of the writer. In The Magician, he turns his perspicacious eye to Thomas Mann. Outwardly genteel, inwardly tormented, cautious yet impatient, suspicious of the powerful but welcomed in their homes, Colm’s Mann is a writer who withdraws from a world losing its sanity but finds himself dragged back into the mess of the times. Desire, exile, family – the themes are ambitious, but in Colm’s deft hands, a superbly crafted epic has emerged. 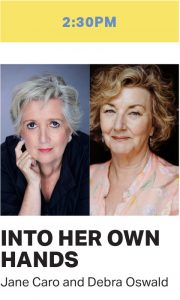 2:30PM
INTO HER OWN HANDS
Jane Caro and Debra Oswald

The strong female protagonists in Jane Caro’s The Good Mother and Debra Oswald’s The Family Doctor take matters into their own hands. Debra’s Paula is a dedicated suburban GP, devastated by the murder of a friend and her children by their estranged husband and father. Jane’s Miriam is a successful businesswoman whose life is upended when her daughter’s marriage turns sour. These provocative, urgent novels brim with fury, grief and deep love as they explore what happens when you are tested to the limit, and ask when is it justified to fight fire with fire?

With its descriptions of the sophisticated economic and socio-political livelihoods of many First Nations’ communities, Bruce Pascoe’s 2014 multi award-winning Dark Emu called for a reconsideration of pre-colonial Aboriginal Australia. Confronting criticism from some who reject its portrayal of Aboriginal agriculturalists, and following the COVID-cancellation of their anticipated Melbourne Writers’ Festival session, Bruce and eminent historian Tom Griffiths (The Art of Time Travel) come together to consider the productive conversation emerging around Australia’s understanding of Aboriginal histories, and discuss the best way to deepen our shared knowledge of our nation’s vital first stories.