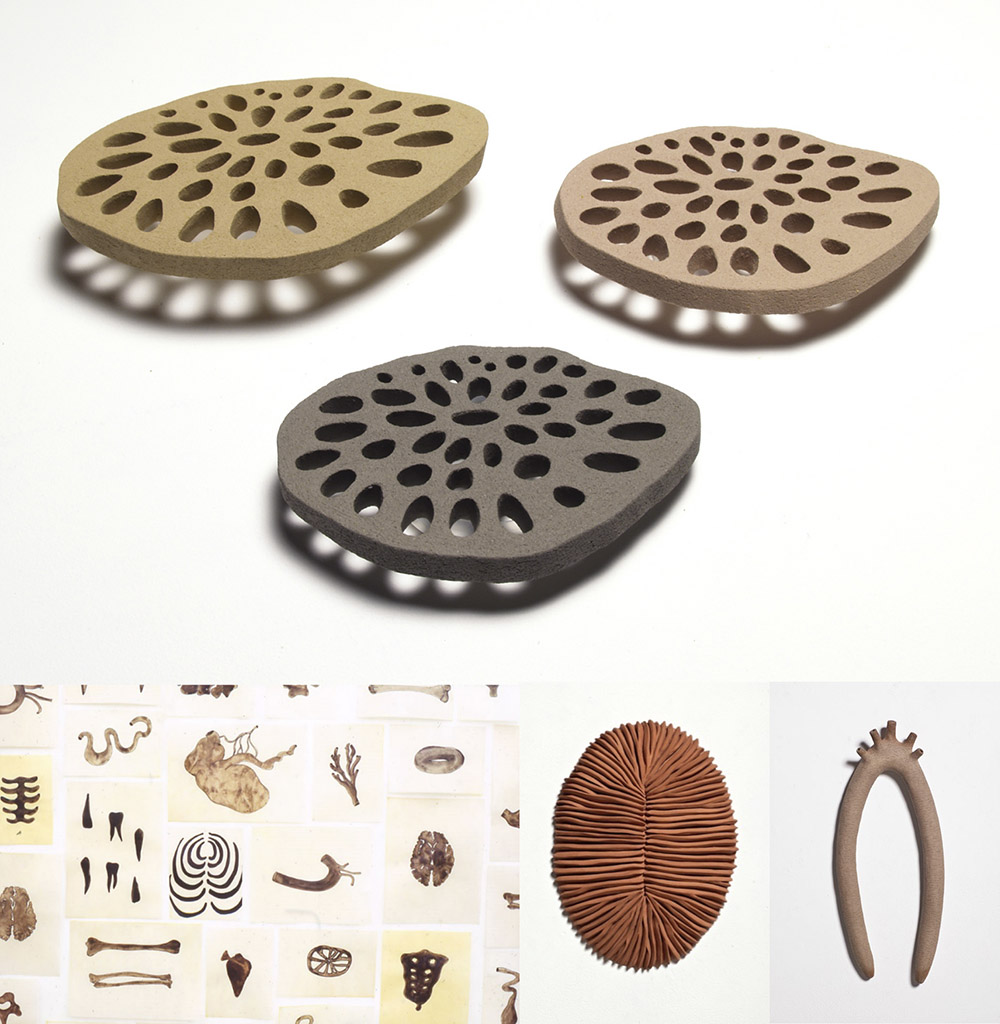 “I believe that art like science can help teach us about who we are, what we are made of and in doing so show us the importance of recognising that we are part of a whole.”
Angela Valamanesh

JamFactory’s Icon series celebrates the achievements of South Australia’s most influential artists working in craft-based media. Inspired by the symbiosis between science and poetry Angela Valamanesh’s artworks elicit intrigue and a strong sense of personal investigation as she manipulates seemingly familiar anatomical, botanical and parasitic forms in beguiling and unusual ways. Primarily known for her biomorphic ceramic sculptures, this exhibition also celebrates the artist’s evocative drawings, watercolours, and mixed media works from her developing style of the late 1990s until present.

Historically, links have been made between the human form and plant species, not only structurally but also through language: the family tree, our roots, or a severed limb, while early medicine made connections between plants that resembled parts of our bodies and their therapeutic effects on those body parts.

JamFactory ICON Angela Valamanesh: About being here is Angela Valamanesh’s exploration into the interconnectedness of life on earth – between human, animal, and plant beings. This life view, first felt intuitively by the artist; is reinforced through her ongoing research at leading libraries and scientific institutions both in Australia and abroad.

Angela Valamanesh was born in Port Pirie, South Australia in 1953 and currently lives and works in Adelaide. Angela holds a Diploma in Design in Ceramics from the South Australian School of Art (1977), a Master of Visual Arts from the University of South Australia (1993), and a PhD from the University of South Australia (2012). Her drawings, ceramic objects, and watercolours are the result of an incredible depth of research, referencing complex scientific, historic, and philosophical ideas. Angela’s imagery stems from micro- and macro- biology, historical anatomical and botanical illustrations, natural history collections, and rare books. Valamanesh’s oeuvre is populated with the animal, vegetable, and mineral with glimpses of microbes, bacteria, pathogens, and spores. Valamanesh’s works elicit ambiguity and present a strong sense of personal investigation. In the artist’s own words:

“It is important that the work is not prescriptive but offers the viewer the opportunity of personal engagement with the work and time to reflect on their own personal experiences.”

Instrumental in Valamanesh’s bourgeoning visual arts practice was her Samstag Scholarship undertaken at the Glasgow School of Art. This residency resulted in the seminal work For a long while there were only plants, 1997, and is the point of departure for this exhibition. This artwork – a watercolour, pen and ink work on paper and dipped in wax – is a repository for images and ideas that have fuelled Valamanesh’s practice ever since.

Angela Valamanesh acknowledges the assistance of the Australian Government through the Australia Council for the Arts.