Stories from the Collection: Sunday Painters by Peter Serwan 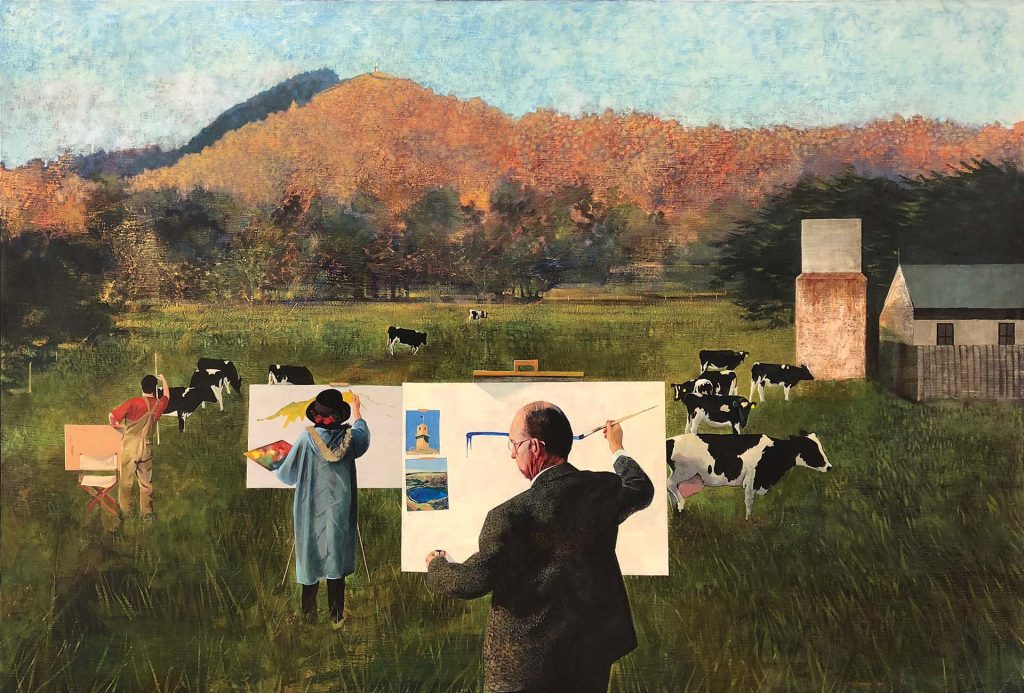 Born in Mount Gambier, Peter Serwan is known for using his immediate environment as a catalyst for ideas and in Sunday Painters, three figures spread through a paddock dotted with cows, using one of Mount Gambier’s most iconic landmarks, Centenary Tower, as inspiration for their painting.

Though this work was undoubtedly done in a studio, painting en plein air, or painting outdoors, as the figures in Sunday Painters are, has long been a source of inspiration for artists. Despite it’s long history, it was probably made most famous by painters like Claude Monet (1840 – 1926) and Camille Pissarro (1830 – 1903), whose mastery of colour, light and outdoor scenes made them notable Impressionists, and champions of the en plein air tradition, which continues to be widely used today.

Painted with a certain flatness, Sunday Painters is typical of Serwan’s style, while also suggesting origins in post-modern art traditions, which you can see in the work of artists like Jeffery Smart (1921 – 2013) or David Hockney (1937 – ). The flatness in Sunday Painters, comes from removing things like shading, instead creating hard lines of colour between the figures and their background, which is rendered in far less detail. This technique separates the figures from their background, removing the idea of depth and instead emphasising the flatness of the surface. Altogether, you are left with the impression that this is a carefully staged scene, quite likely drawn from the artists’ imagination.

In this deliberately staged scene Serwan presents us, he is using the figures and features within the landscape to draw your eye around the canvas. Starting with the central figure in the foreground, you’ll notice the other two figures are placed in a diagonal line in the mid-ground, leading the eye to the left hand side of the canvas. From the final figure on the left, the eye is drawn up, to the highest peak featuring the Centenary Tower, though practically the smallest object in the painting nevertheless captures your attention. From the peak, the eye tends to drop to the white building on the right hand side, and finally, back to the central figure, so that overall, the composition forms a loop.

Combined, Serwan’s technique and composition demonstrates an interest in building tension between the figures painting and their surrounding environment. This tension occurs by drawing our attention to figures, as both part of and separate to the environment they are in, and is a tool that we can use to ask ourselves other questions about this painting. At face value, this painting depicts a fairly ordinary scene, but when you start realise how it is carefully constructed, you may notice other clues that make this painting unusual.