Stories from the Collection: Flying Mother by Barbara Hanrahan 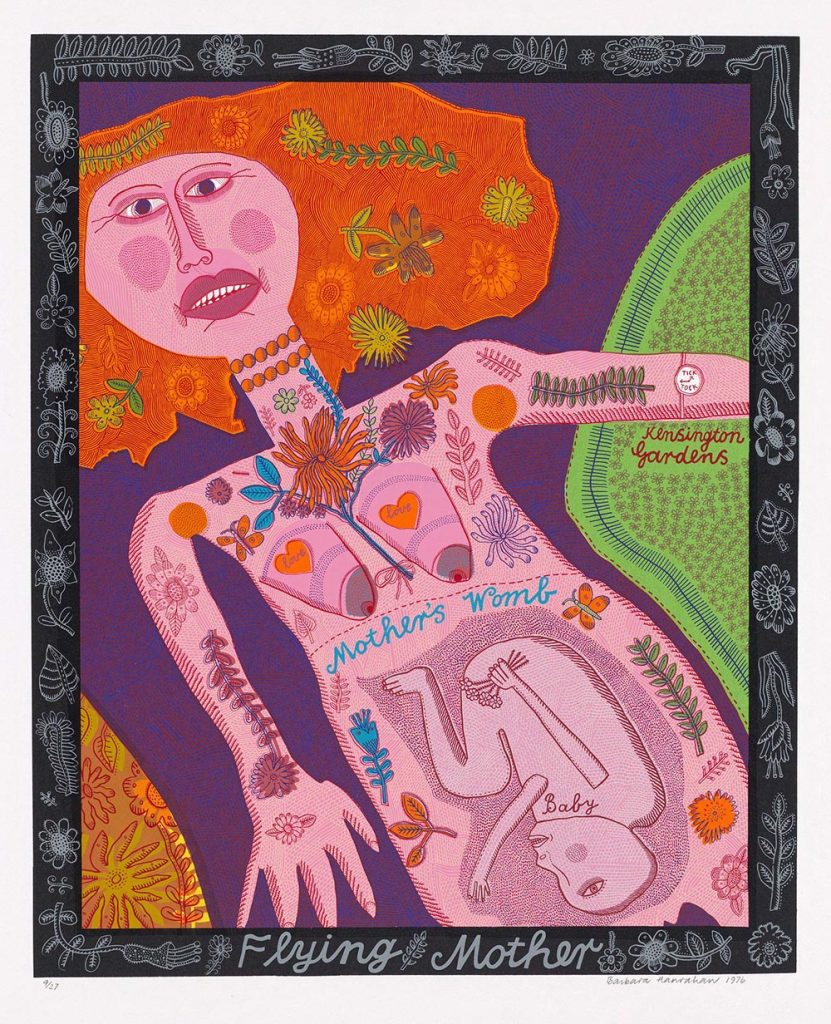 After the death of her father, a year after she was born, Barbara and her mother moved into the family home with her grandmother and great-Aunt, in the work-class suburbs of Adelaide. Growing up as she did in the post-war decades, Hanrahan was intimately aware of both the social structures demanding she get married, have children, and adhere to the class divide, and how determined she was to escape this fate.

After studying to be an art teacher at Adelaide Teacher’s College from 1957-60, it was when Hanrahan discovered printmaking in the early 60s that she felt as if she’d “suddenly found my medium”. However, feeling trapped by the limited opportunities available for her in Adelaide, Hanrahan travelled to England in 1963 to study at the Central School of Art. From that point Hanrahan would split her time between England and Australia, until she moved back to Adelaide permanently in 1983.

In 2007, the Art Gallery of South Australia put together a significant retrospective of Hanrahan’s work titled The Divided Self: The Prints of Barbara Hanrahan. This exhibition and its title explicitly references the conflict of self that dominated Hanrahan’s life. An avid gardener and deeply connected to nature (this interest is certainly a product of her grandmother, whom she referred to as earth mother and who was devoted to her garden), her prints often feature picturesque garden-like scenes, yet simultaneously she was producing work that dealt with female/male sexuality and revealed her angst and anger with the conventional status-quo. Her ‘unflinchingly frank’ approach, highlighted through her distinctive, almost graphic style, laid her subjects bare, both physically and emotionally. Often broaching deeply personal material, her concerns reflected women’s social standing and how it tied to matters of feminism and sexual liberation, through the turbulent 60s, 70s and 80s.

In Flying Mother this complex mix of the natural world, the angst of pushing against the status-quo and her own personal story are all present. The print features a red-headed female, naked and embellished with flowers, floating above recognisable Adelaide geography. In reference to her working-class background and the strong class divide Hanrahan experienced growing up, this figure is on the left-hand-side of Kensington Gardens, firmly on the wrong side of the tracks that are bordering the gardens. Though on one hand the figure represents a typical ‘earth mother’, connected to her body and nature, there are clues that demonstrate all is not as it seems. A dotted line runs across the torso, separating her pregnant self from the rest of her body, suggesting some ambivalence or conflict about the idea of motherhood and nurturing. Tellingly on her left writs is a watch, spelling out the words “TICK TOCK” a vivid reminder of the expectation and pressure women faced to have children before their biological clock ‘runs out’. These ideas would occupy her, one way or another, for most of her life.

After battling with cancer for a number of years, Hanrahan died at 51, after 22 solo exhibitions and publishing 15 books. Besides the five prints and three books in the Riddoch collection, Hanrahan’s work has been collected by all the major institutions including, the National Gallery of Australia, the Art Gallery of South Australia and the Art Gallery of New South Wales. The University of South Australia has also named a building in her honour.